I was interviewed about #INeedDiverseGames by @sportsmyballs over at @Autostraddle <3 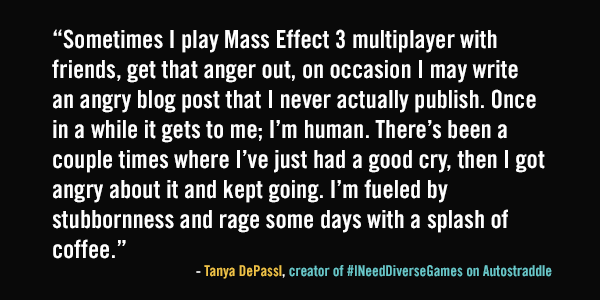 WE ALL NEED DIVERSE GAMES: An Interview with Tanya DePass, Creator of #INeedDiverseGames

It can be dangerous to meet the people you internet-admire. There’s the possibility that they’re simply not as cool in real life as they are online. It’s easier to seem successful and put-together when you have time to carefully craft responses on a screen. It’s safer to be a fan when there’s considerable distance involved.

Then there’s another danger: that they are even cooler in real life than their Twitter persona suggests. Such is the case when it comes to Tanya DePass, gaming badass. Tanya, a queer woman gamer of color, is a force within the online gaming community and meeting her made me incredibly nervous.

On October 7th, 2014 Tanya tweeted “#INeedDiverseGames because I am tired of the same variant of scruffy white dude protagonists in every game I buy.”

Soon the internet would rally around this hashtag, each non-white, non-dude gamer aching for the same thing. Tanya had tapped into something the gaming community has been struggling with since its inception.

Al Rosenberg: So, the #INeedDiverseGames tags just turned a year old. Does it feel like it’s been that long?

Tanya Depass: Yes and no. Some days it feels like I’ve been doing this forever and other days I wonder when this happened, and have I been doing this stuff all along but not under the auspices of an organization. Like I blinked and wow, look at all that’s gone on in a year! Last year I had maybe 300 twitter followers, now I’m over 3100, and it’s been a wild ride. Other days I’m like who put me in charge, why, what is going on!? But it’s been amazing and I’m so, so grateful and humbled by the response to this little hashtag I threw out there a little over a year ago.

A: What has been the best thing about #INeedDiverseGames in the last year?

T: The community that has sprung up around the tag, the connections we’ve made with other gamers, critics, streamers etc. We’ve got a good little thing going, and it’s amazing. Also, getting picked for the#IndieCade15 #GamingForEveryone Pavilion is a huge honor and it’s awesome. So we’re very excited and grateful for the chance to show off what we’ve done and where we want to go.

Read the rest over at Autostraddle!